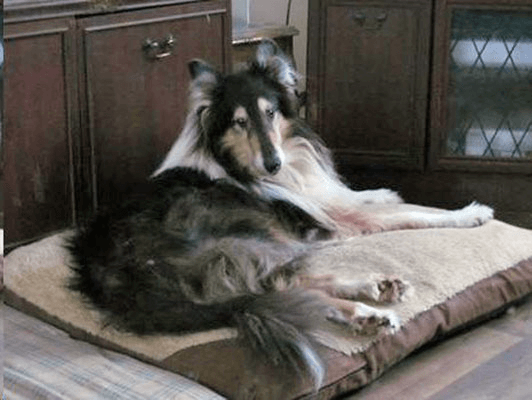 It is with a sad heart that out golden oldie Maverick has passed away. He was 16.5 yrs old, and was a great character.

He hated kids, he hated other dogs except my blue girl Opal, and he was always moaning Lassie he wasn't, many who knew him often said that it a child was in trouble Maverick would run the other way, but he did have a lovable side to him.

In his younger days I did show him, but he never  really liked it so after a while I retired him. We never bred from him and his breeding was Bretton park/Aspera and I have learned that with his death this  line is now extinct.

Maverick enjoyed camping and was always unhappy when it was   time to go home he often refused to get into the van to go home. In later life   he began to struggle to get up and so he used to make a noise like a cuckoo  telling us he wanted up.

I bought Mav as a gift for Barry and this was his first dog he actually owned. So to all who knew Mav either from his showing days or from camping or from my home I know that you will miss this character as we do.

Love to you Mav as always...R.I.P. my friend till we meet again ...THE CUCKOO HAS NOW LEFT THE BUILDING