CAP – A – TAIN YOUR ROVING REPORTER.

" Hi fans it is I Cap-a- tain your roving reporter ( I hope you are fans of the news page ) well I am reporting the news this week as I did get extra payment with a nice juicy bone and yes folks I did manage to chew it, despite not having many teeth. Will have to see what I get paid with this week, hope it’s something tasty, don’t like the idea of being fur load as it’s boring just sitting about on my bum, anyway enough of me you want to hear about what’s happening." 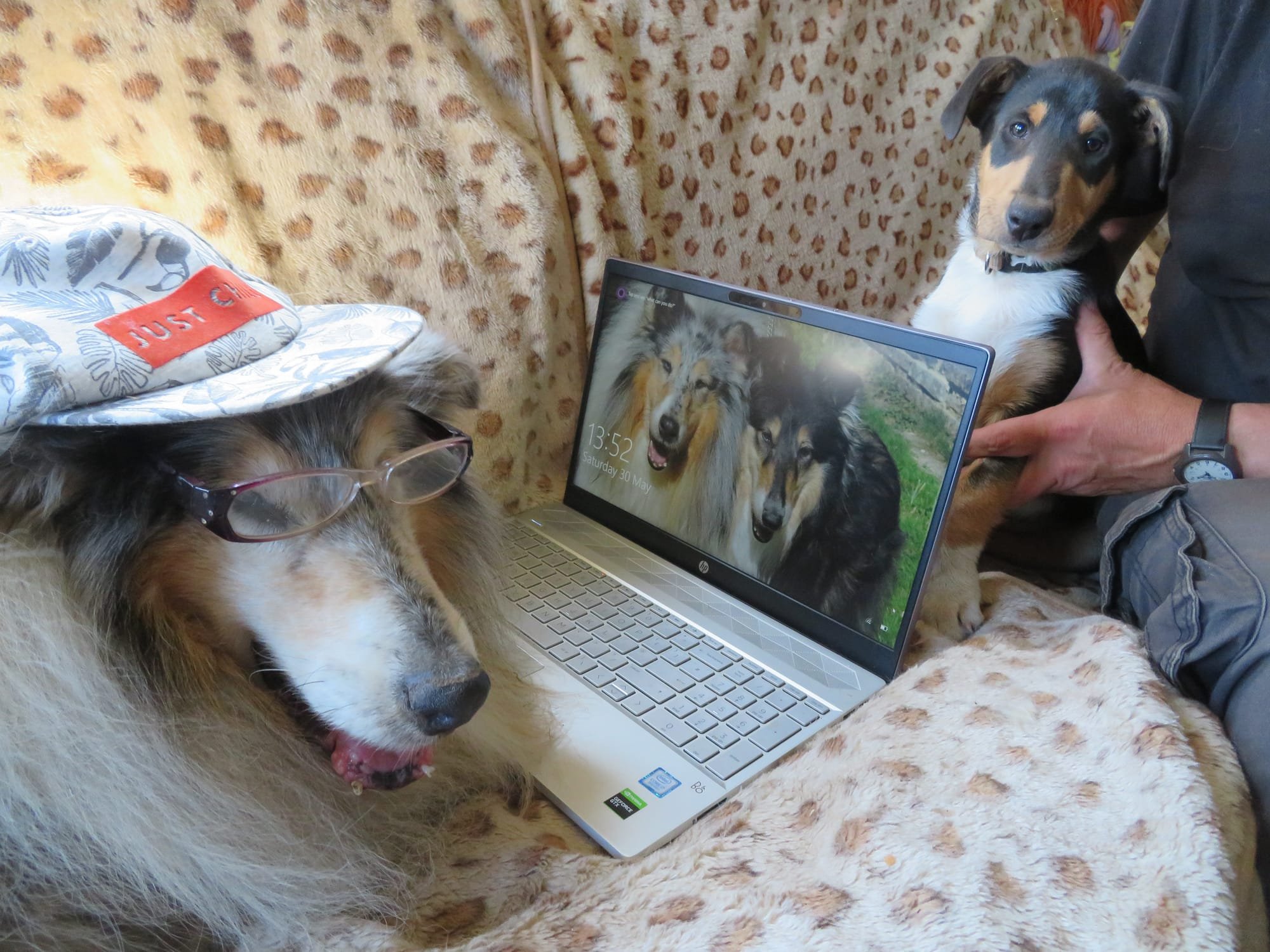 " I did an interview with our youngest member, a young up start, and a smooth to boot, our mum is going daft in her old age, a smooth ...well I never ! the dark side comes to mind ( should have called him Darth Vader)."

Captain "Hi there Diablo, you have been here with us for two weeks now so how you settling in?"

Diablo "Well it was a bit scary at first, some of the big dogs did not seem to like me, they kept showing their teeth and gums"

Captain "Wow I can’t believe that, most of the gang are a very happy bunch and just love the youngsters, I know Jet can be a bit pushy and grumpy but the rest of us are really rather nice, Just probably you caught them on an off day, or they were tired from being out in the sun all day." 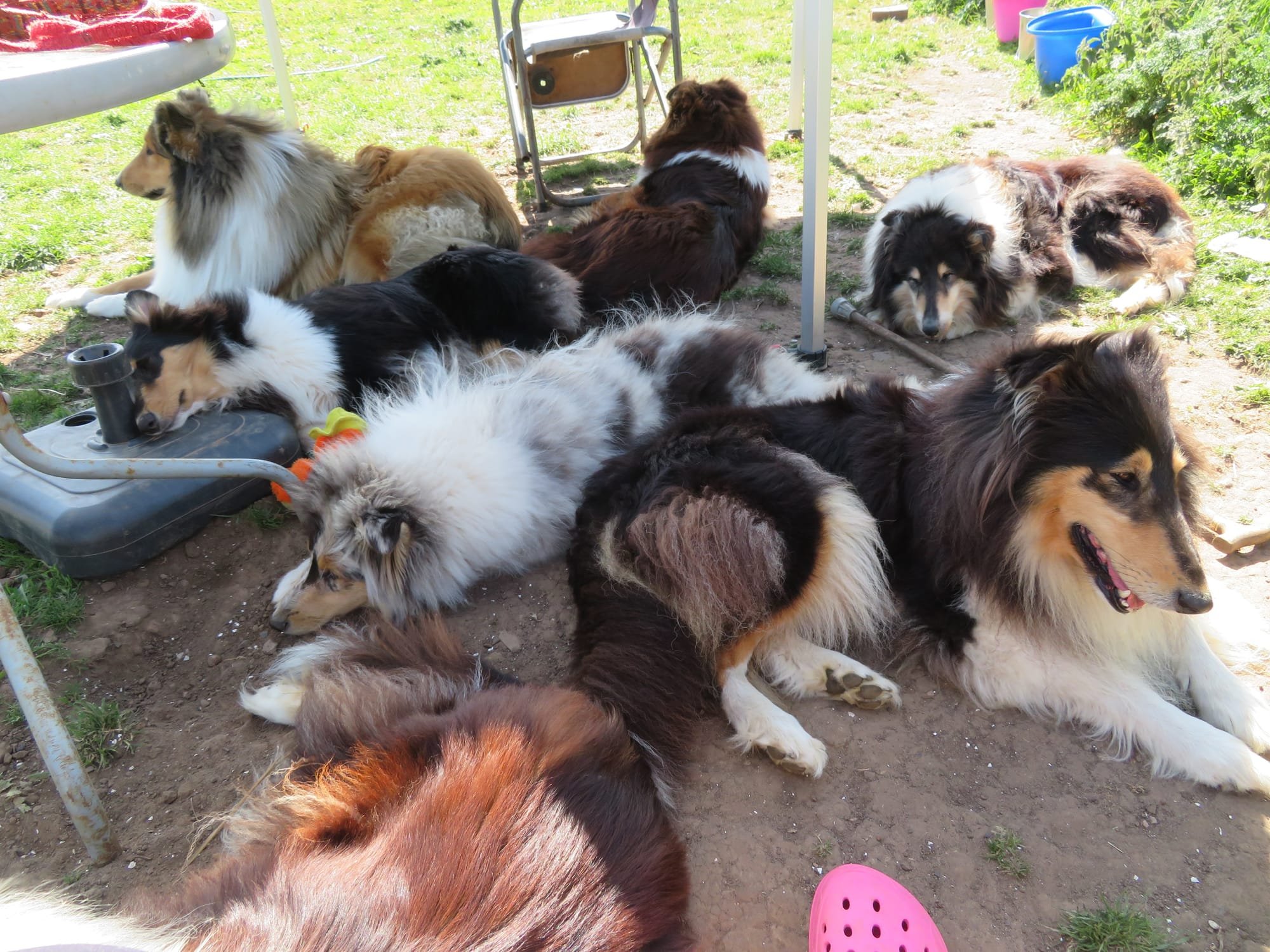 Diablo " Well you Captain was one of the worst ones, you really did not like me at all, every time I came near you, you snapped at me with those big pink gums."

Captain " I am sorry Diablo, you must have caught me at a bad time. So how are you getting on ? ( changing the subject quickly )."

Diablo " it’s very good here, lots of treats and cuddles, rides out in the car ( although I dribble a lot). Nice big fields to run and play in , large big pool plenty of toys, lovely grub, what more can a pup wish for? Oh yes and other puppy’s to play with an plenty of friends."

Captain " That is good I am pleased for you, so what do you think of the horses in the other field?"

Diablo " Well I haven't seen much of them as the field is to far for me to trot over too ( I am only little at the moment) and they look scary to me . they look like great big lumps ( don’t tell Georgie I said that lol)....Just large lawn mowers really."

Captain " I certainly never thought of them like that ( frowning) but yes you are right , every time I look over to them there eating the grass, perhaps Barry should use them instead of that great smoking contraption he calls a lawn mower ( the horses cut the grass better than Barry,) Shhhhhhhhhhh don’t tell him." 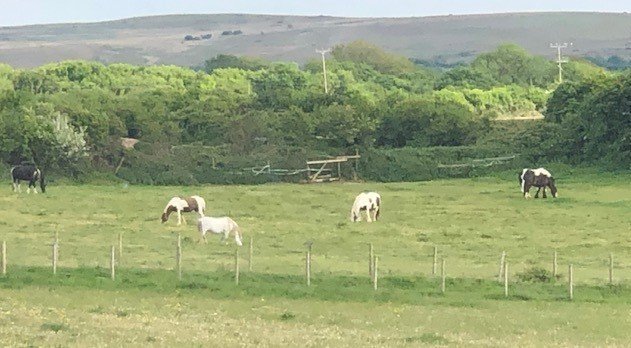 Diablo " I also took part in a photo shoot."

Captain " I went on one of them, had to go over the fields in the hot sun, stand for what seemed ages, just so Kat could click away with this black gadget that clicked all the time, I had to stand first this way then that way I got so fed up I wouldn’t move, so Kat started laying on the floor and still the camera clicked, I was so please when she stopped, she is very nice but she doe’s go on so lol." 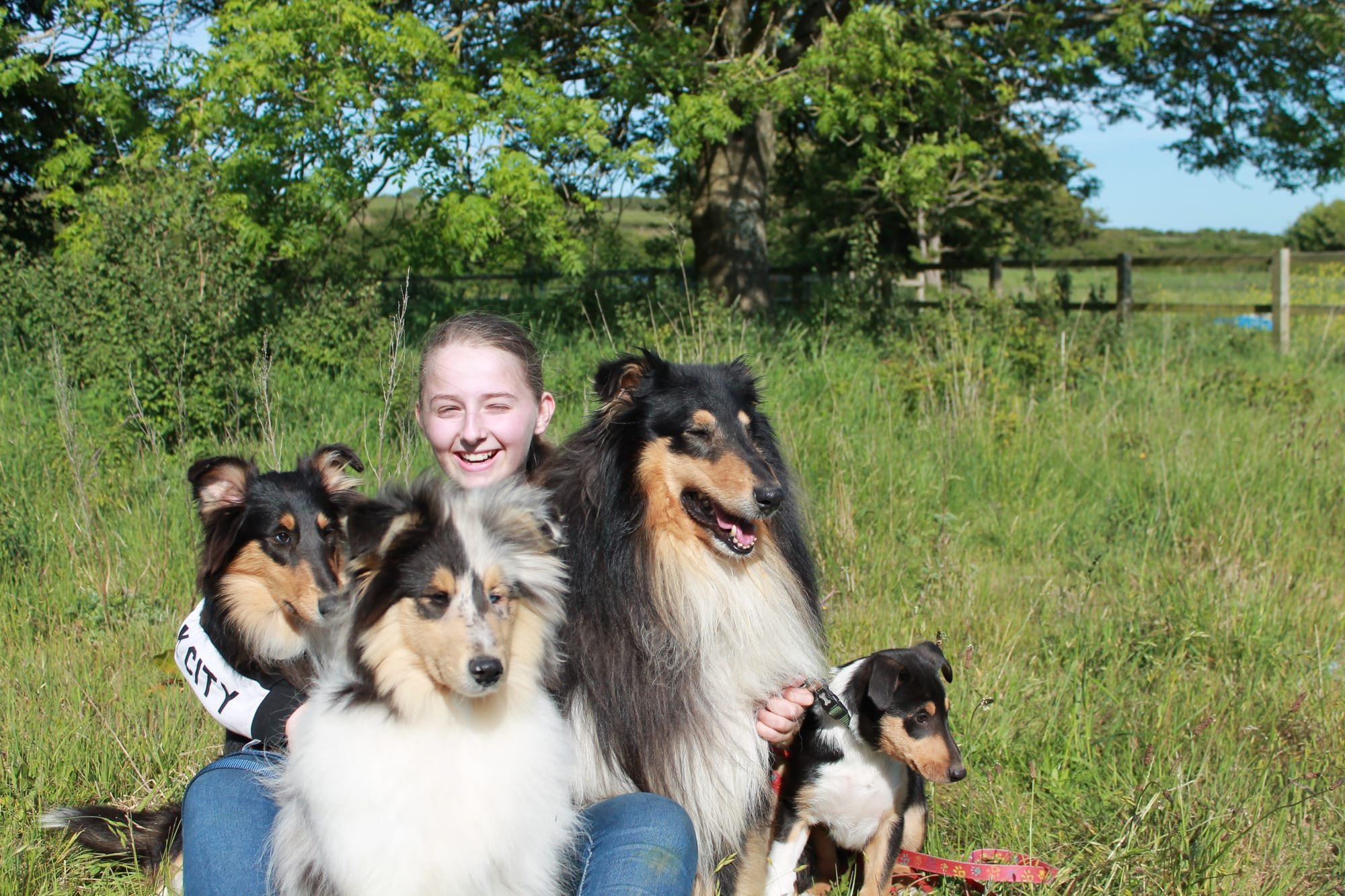 Diablo  "Yes that sounds about right , but I did enjoy it, and I was with Georgie so that was good I like her, she kept whispering that she was one of my owners whatever that means, and I had pictures taken of me Thistle, Magic and Raffles together, they are my friends not sure about Raffles ( he only has eyes for Georgie ) have too watch that one me thinks. When we were over the field the black and white cat came over following us, I kept giving my best evil eye, but it did not seem to notice, Kat kept shooing it away but it kept coming back." 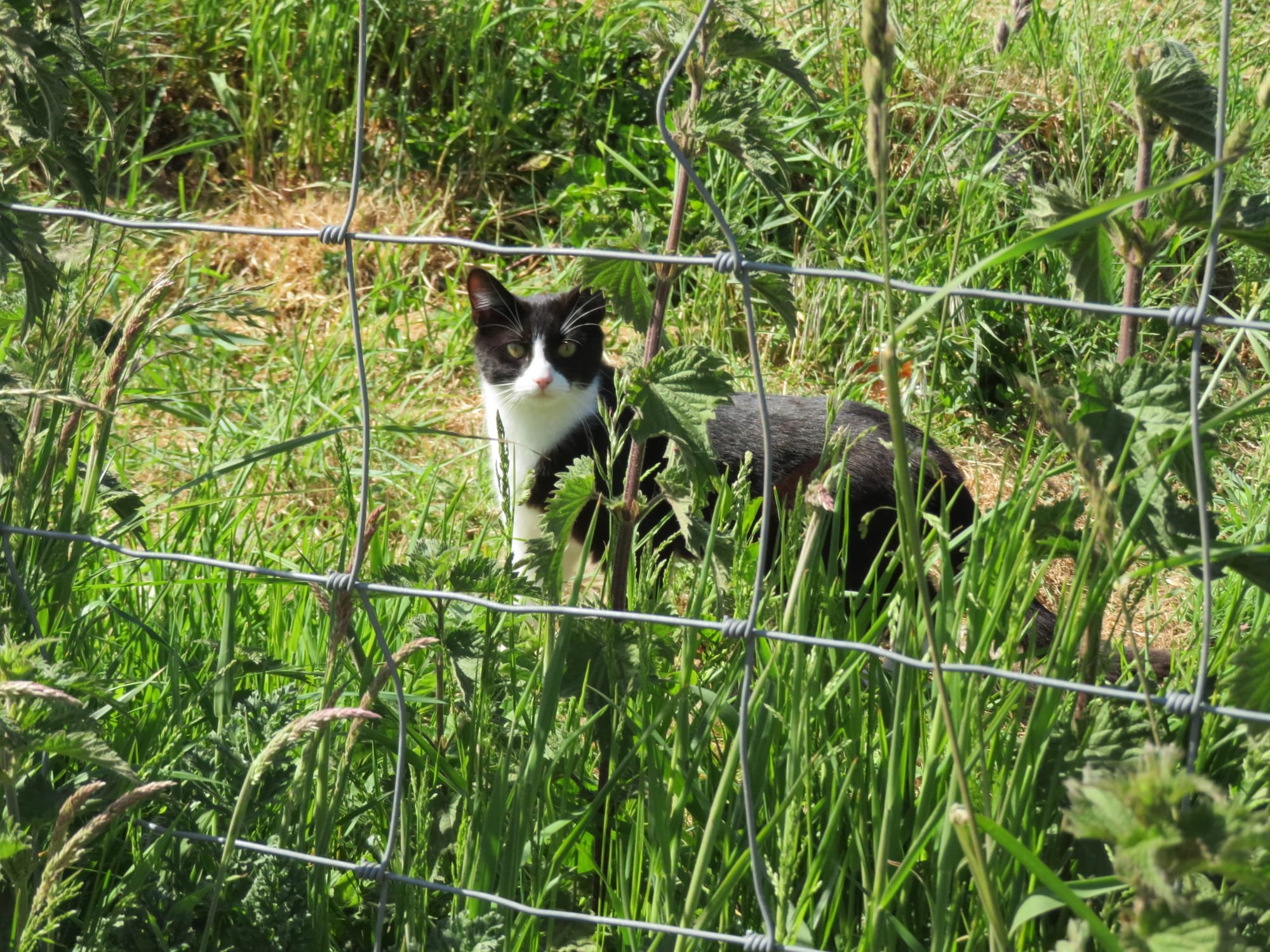 Captain " That is the office kittens mum, she often tries to tease the dogs, she is supposed to catch the mice and rats around here, but personally I don’t think she is up too the job, if she isn’t careful Kat will sack her , she will have to pack her bags, but with this Covid 19 she wont be able to go anywhere, so all I can say is watch out mice"

Diablo want a bit of gossip.....(looking around and touching the side of his nose) 2I heard it through the grape vine (whatever that is)"

Captain "I think that’s a song."

Diablo "Stop mucking about, I heard that Barry isn’t a happy bunny as Simba and Magic both ran off with the hose pipe that he uses to fill up the pool with, so now he is out there in the hot sun walking the 7 acres to find it, it is bright blue so shouldn’t be a problem but you know Barry he needs help as he will take ages to find it, so who is going to tell him, NOT ME. Is that all for now as I am tired, it’s passed my nap time."

Captain "Yes Diablo, ok you go now and join the others, thanks for the insight in to being pup round here We will catch up again."

With that Diablo wanders off.....Captain gets off the sofa, has a drink before sleeping in the corner under the fan. 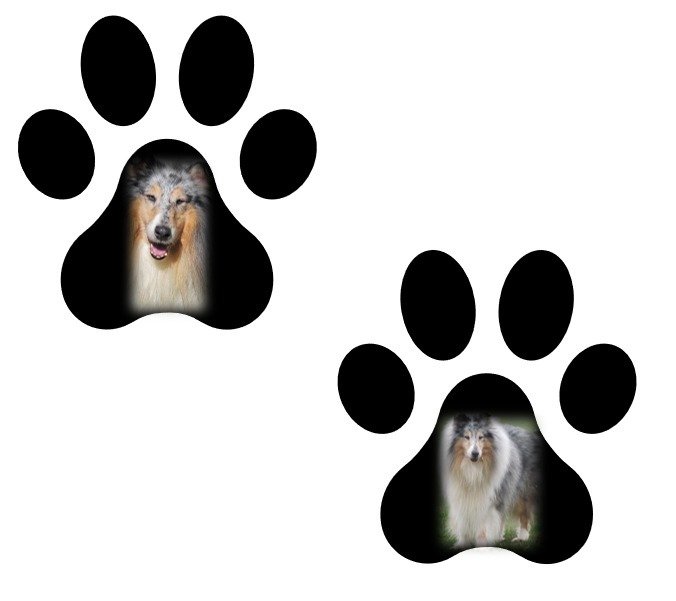